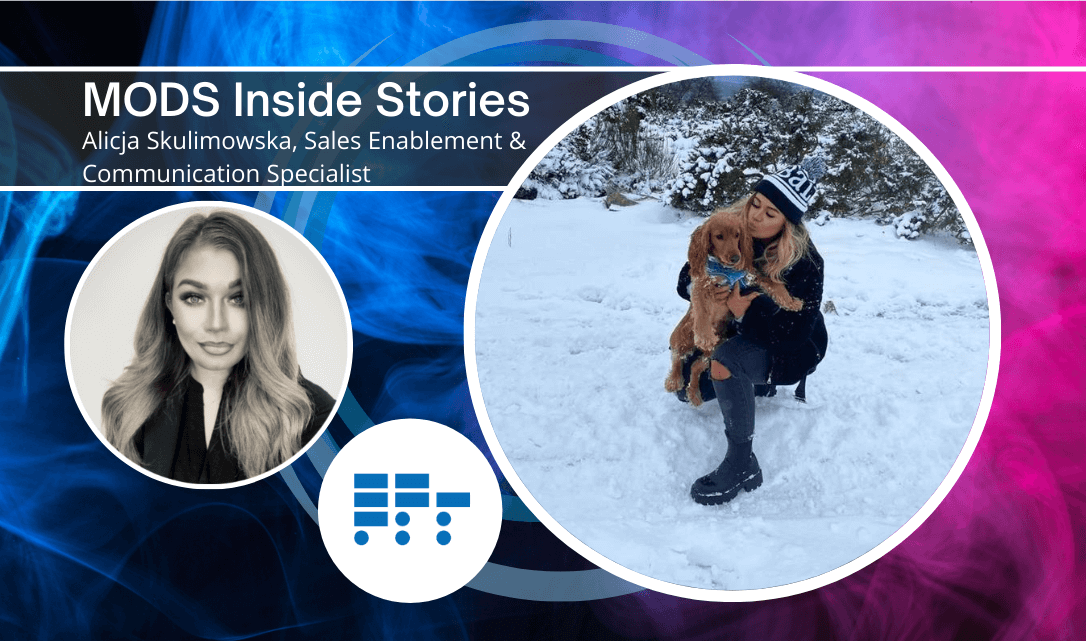 One rising superstar of MODS UK is ‘Office Coordinator and Planner’ Alicja Skulimowska, who supports the many departments and staff members based in the Aberdeen office. Alicja joined the team at the end of 2019 as a Business Administrator and since then her skills have been stretched and developed to include many tasks outside her role.

“Funnily enough, when I started at MODS in December 2019, we were at our previous office in Westhill, on the outskirts of Aberdeen. I arrived at 9am and my boss announced that my first task was to organize the new office space that the team were moving into in three weeks.Nothing was arranged, so I had to organize the furniture, new flooring, telephone, and internet connection, get the lease agreement signed – you name it, I had to do it. This was all in December during the manic build up to Christmas festivities and my manager wanted us in the new location by the end of the month!

It really wasn't business admin’ when I first started but I did demonstrate my organizational skills in that manic first three weeks. The incredible thing is that we could beare planning to move premises again as our team keeps growing. It’s just as well I have that previous experience to call on”.

Work-life quickly settled down after the mammoth office move and Alicja was able to demonstrate her advanced office and administrative skills. These talents were developed during her first job after leaving school. A Modern Apprenticeship at one of Scotland’s largest organizations in the Auto’ industry gave Alicja the platform to gain qualifications in customer-facing skills, IT and office software systems.

“I did enjoy the four years I spent in my first job, I learned so much and had the opportunity to work with a number of departments ranging from Accounting to Servicing and Car parts. I didn’t realize it then, but it was great training for my work with MODS as I do help so many of our specialists and get involved with lots of different projects. I love the variety, I know if I’m determined to do something, I can achieve anything and I love new challenges."

"The people, the team that you work with, make a workplace and at MODS, it’s a professional environment with international clients but it’s also a really positive place to go to every day. I’ve learned so much here, everyone is very supportive and that makes the biggest difference of all, doing something that you enjoy.

Working for MODS UK has certainly delivered on all of Alicja’s job attributes. Since her whirlwind start, Alicja has sourced and implemented new Planning software systems to streamline project development and personnel schedules. She has also qualified as the UK teams‘ official Quality Assurance auditor.

“ I feel like my communication skills were improved during the training. I am organized but the QA process was new to me. The first audit we did after I qualified to be an internal auditor, we passed with flying colours, it was a great feeling. Part of my week is spent updating the manuals and procedures to make sure everything is in line and adhering to the standards”.

As Alicja settled into her role at MODS, her colleagues soon noticed her abilities and were quick to exploit them. Soon Alicja was assisting on client projects, business roadmaps for product development and enabling the team by creating documents and supportive material. It may have been a challenge to be the ‘first responder’ to an expanding team but as Alicja explains, it has been an experience that has given her a firm foundation in MODS’ core business.

“What I really appreciate working here is that there's room for self-development. There's growth. MODS is growing and they encourage their team to do so too, and they’ll support you one hundred percent”.

Alicja is the perfect example of promotion from within, as she has been awarded a new role as Sales Enablement & Communications specialist reporting to the VP of Marketing. Joining the Marketing team will test her customer service and creative skills supporting the ever-growing client base across the world.

“I’m really excited about this new opportunity it’s going to be so interesting, and I’ve already started the online Hubspot training made available to me. I feel like it's something that I really want to do. I've progressed so far since starting my job with MODS and I can’t wait to start my new adventure in sales”.

A hectic work schedule is balanced by happy home life. Alicja enjoys going to the gym for a cardio and weights workout or specialist fitness classes, including boxing. She has a strong family unit supporting her and visits her Grandparents, who raised Alicja, several times a week. Although marriage and children are not on the agenda as yet, she enjoys being with her sister and her family.

When not with her relatives, Alicja spends downtime with her close friends and admits to being the 'designated chef' when they all get together. However, there is one special little friend that Alicja just cannot liv “I have a dog, Daisy, she’s a golden Cocker spaniel. She's my
little best friend. We go for long walks every day, no matter the weather. I put my headphones in, we go out for hours and forget the rest of the world. Daisy is a year old and has the sweetest character ever. We actually share the same birthday, so that’s kind of special”.

If you ask her Aberdeen colleagues, they will also say that Alicja is ‘kind of special’ too. As a popular and dependable team member, Alicja is destined to make her mark at the MODS head office and progress due to her dedication and diligence.

Matching the role with the right candidate is never easy, as is finding the organization where you feel professionally satisfied and appreciated but Alicja reckons she has found the perfect match:

“I actually see myself staying with MODS for a long time. I want to grow with the company. It's certainly an exciting environment to be in, especially with digital software. The company's growing, business is booming, the team is expanding, it's like working with your friends, you know everyone, we work together to get the job done, and when we can, we enjoy ourselves too”.

Want to be part of a growing team? Check out our