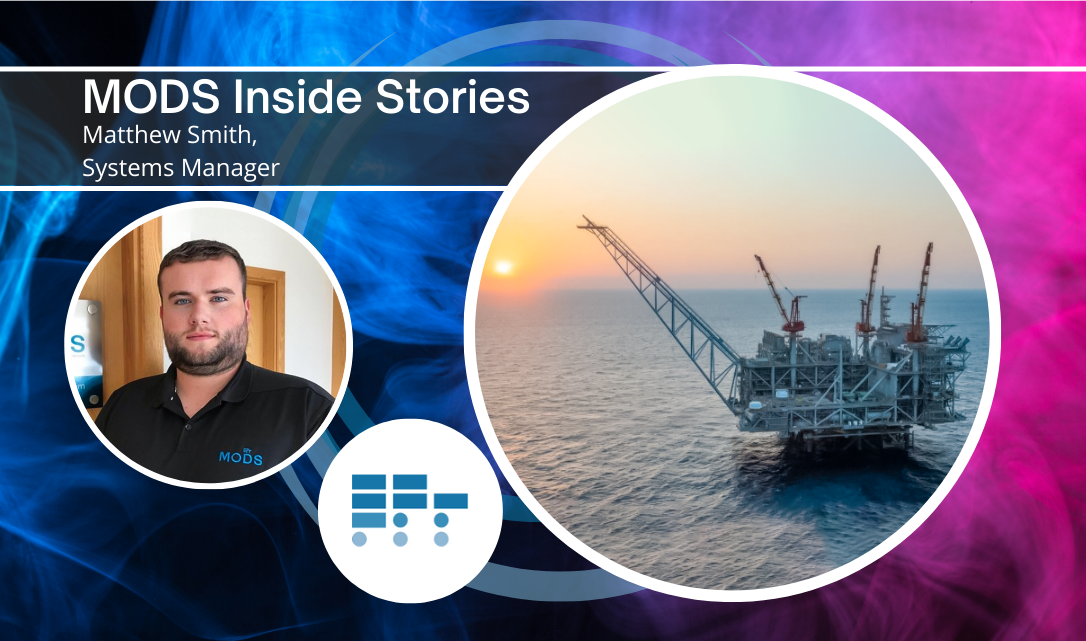 Matthew Smith came to MODS in 2018 as a trainee, straight out of a Mechanical Engineering program in his hometown of Aberdeen where he grew up exposed to the oil and gas sector.

Now, as Systems Manager, Matt bridges the gap between clients and the development of MODS Connect. The most affable engineer you’re likely to meet, and coming with loads of integrity, it’s no wonder Matt swings effortlessly between MODS’s swath of international clients and internal software developers in a quest for continuous improvement.

“Our chief want in life is somebody who will make us do what we can.” — Ralph Waldo Emerson

As a young intern with Wood – one of the world’s leading companies in energy and the built-environment sectors – Matt had a run-in with his chief want, which came in the form of a Bell brother.

In 2017 Matthew Bell, MODS’s Chief Product Officer worked with Wood as Lead Piping Designer. When he left in early 2018 to join MODS’s leadership team, he remembered the young engineer he taught to draft.

“Matt came on to our team at Wood as an intern, one day a week for a year. This was unpaid work, which, to me, demonstrated a real drive and enthusiasm to move his career forward.

I believe these are two extremely important attributes, so when the opportunity arose for Matt to come onboard, I did not hesitate.

Matt has continued demonstrate these attributes and more, and has become an integral part of the team, moving into managing and training clients all within in three years.”

Matthew Bell invited Matt onboard with MODS in October 2018 as a Trainee Systems Engineer. Then, it was induction by fire. Matt jumped into the deep end, starting with digitizing all of JGC’s ITRs into the predecessor of MODS Connect (Virtual Manager). 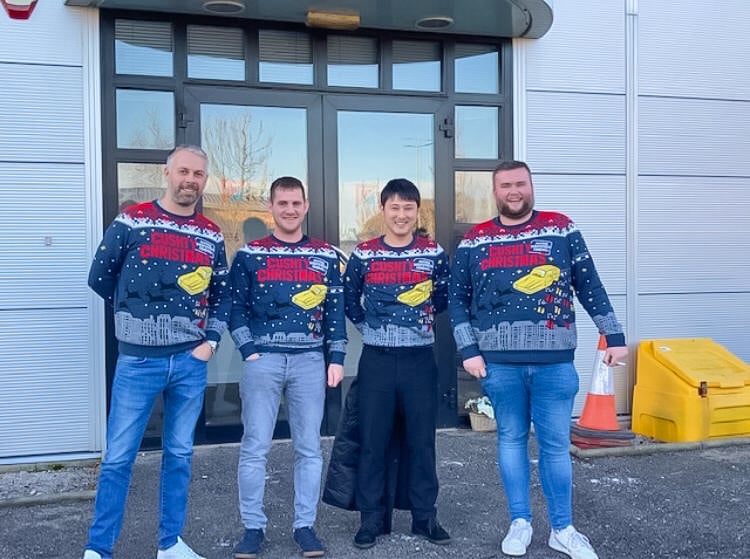 As JGC is a leading EPC business, this was no small undertaking. Given the sheer volume of ITRs he had to process into digital, this task alone saw Matt into 2019.

Matt speaks of the project as though it were yesterday:

“Digitizing the JGC suite of ITRs was my first task at MODS. I went through around 200 ITR word documents and programmed them so that they could be answered on the handheld devices and displayed in the MODS Origin, called Virtual Manager Enterprise at the time, desktop Completions tool.”

Completing JGC’s suite of ITRs prepared Matt for the work to come. 2019 beckoned a substantial joint integrity job for a new build occurring in Corpus Christi, Texas, which put Matt’s dedication to the test.

As part of a small and intimate team, Matt’s camaraderie served him well. He brought his own integrity to the joint effort (pun intended).

Promoted to Systems Engineer when this joint integrity project landed, it was a time for Matt to demonstrate his chops:

“This first client project that MODS asked me to work on was during my probationary period. I felt that it was a brilliant opportunity to show my value and earn their trust. The joint integrity project was a success, and I was kept on board. So, I think it worked.”

Twenty-thousand joints (and lots of late nights) later, the project was complete. Matt and a couple of colleagues between the UK and the US successfully converted all 20,000 joints into data, putting them into the MODS system to digitally test and complete certifications for each joint.

Matt’s pride is palpable as he describes the asset made from these components, which now sits off the coast of Israel as a fully functioning platform.

Matt may be young, but he’s already participated in shaping MODS’s history. During the transition from Virtual Manager to MODS Connect, he shepherded the transition in practice, acquiring tons of experience in the Completions module, digitizing three suites of ITRs.

Digitizing ITRs hundreds of times over, this practice established Matt’s Connect expertise. Through the volume of repetition, he uncovered quirks of the software in development, working simultaneously from the client and developer sides to rectify any issues that arose.

At present, MODS devotes around a dozen staff members to the MODS Connect software package. Recently promoted to Systems Manager (his goal since onboarding with MODS), Matt now headlines improvements to enhance the software from the operations side of MODS Connect, bridging the gap between the user and the internal software development team.

A logical and lucid thinker, Matt embodies the engineering approach to problem solving. He breaks things down into a digestible format, writing development tickets, outlining the scope of the software and spending time with the developer to build and test his recommended modifications. All this to improve product performance and to ensure clients receive bespoke solutions to their problems.

While Matt problem-solves like an engineer, his personable demeanor and effortless communication skills make him the ideal technical-to-client liaison. His proudest achievement to date at MODS reflects this skillset: being put in charge of his own client for the first time in 2020. It wasn’t just any client either, but a leading provider of oilfield services to the global O&G industry. 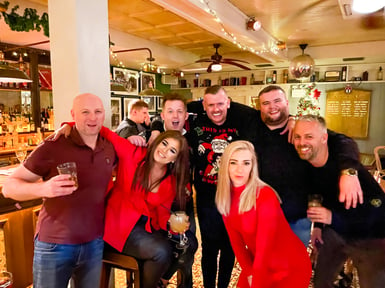 “Working with the clients is, by far, my favorite part of the job,” he says. “The reason for it is that, while I understand the software, I learn so much when I speak with the client. They teach me a lot about how we can improve our software to better meet their needs. And my job is to make sure that it meets all of their needs. Clients tell me where the gaps are, and I join the dots to solve any issues.”

Following his earlier MODS projects, Matt now also has a successful North Sea turnaround project under his belt, and his biggest project at present has recently closed-out its first work pack. There are other jobs well underway, too, including 80 work packs on the horizon. This summer, Matt’s looking forward to sinking his teeth into MODS Origin, when he’ll start a series of travels to Saudi Arabia to work with a big partner to provide software support and overall training for JGC Gulf's DPCU (Dew Point Control Unit) team.

The consummate people person, Matt is well-spoken, easy going and 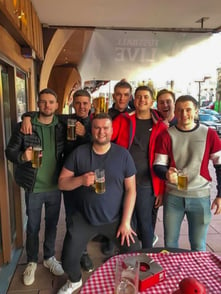 a delight to talk to. He spends most of his spare time with family and friends, socializing, enjoying football matches (he’s a Rangers fan, which is practically a family obligation) and traveling.

Also a fan of both boxing and music, Matt even had aspirations towards one of these (hint: it didn’t involve gloves). These days, instead of playing, he goes to gigs and festivals, inspired by the Indie scene but also enjoying music from the 60s, 70s, 80s and 90s Brit pop.

A likeable young man, Matt is made even more so when he lights up talking about his black lab-cocker spaniel cross, 1.5 year-old Reggie. Despite Matt’s longstanding relationship with Matthew Bell, it’s the latter whose dog, Megan, rules the office roost in Aberdeen, making Reggie bow out red faced to stay home and cause adolescent mischief. 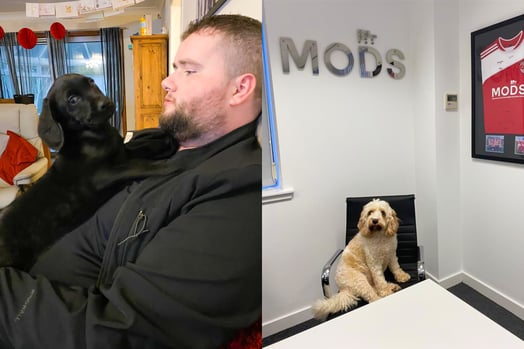 Matt’s mum is a teacher and his dad in construction, and it’s clear where these two skillsets parlay into his own talents of communication and practical troubleshooting. His younger twin siblings are following in their big brother’s footsteps, pursuing engineering at university. They’re clearly a close-knit family and the origin of Matt’s core values. It’s why he’s such a good fit at MODS, where family values reign.

“I came into MODS at the age of 20,” Matt says, “however, I was always treated with respect. I was offered lots of opportunities to prove myself from an early stage in my career. The trust that MODS places in their employees makes the company great to work for.”

Already excelling in his most-recent position, Matt’s upward trajectory with MODS continues. Matt’s likability is undeniable, but in tandem with an engineer’s mindset, his potential soars.

for more insight about the projects and software Matt talked about.